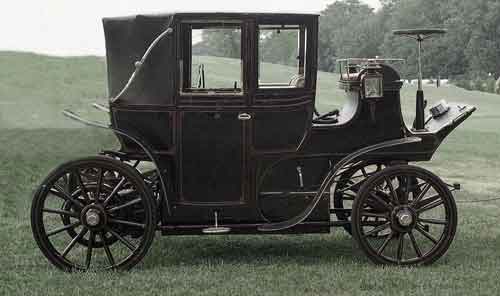 At the turn of the 20th century stagecoaches pulled by horses were still in widespread use in the United States. The manufacturers of the Columbia Electric Coach, the Columbia Automobile Company based in Hartford, Connecticut, were already well experienced in manufacturing cars; they were a very substantial company already, employing over 10,000 people.

Why was it built?

New York was already a bustling and wealthy city and the owner of the Columbia Automobile Company, Colonel Albert Austavus Pope, saw a market for a prestigious vehicle to carry visiting dignitaries and business people from the Grand Central railway station to their destinations within the city. The primary objective was to produce a means of transport which was comfortable, reliable and prestigious; and which could be expected to start up very quickly. Steam power was reasonably advanced at the time and was considered for a while, but the time it took to raise a head of steam to power a vehicle made it unsuitable for short journeys. Petrol engines were still in their early stages of development, and were unreliable; starting them could be difficult in an era before electric starter motors existed. Battery power appeared to be the answer.

How powerful was it?

Four sets of batteries were fitted; these contained a total of 44 cells, and produced a power output of almost 2 hp; quite a lot of the time, particularly considering the light construction of the carriage. The maximum speed was claimed to be fourteen miles per hour, with a range of up to 40 miles; and the revolutionary pneumatic tyres gave a much more comfortable ride than the solid rubber ones fitted to conventional coaches.

The coach was built on traditional lines; the frame was carved from oak which was polished and lacquered, and the seats were covered with leather. Body panels were of hardwood construction. The quality of finish was very high for the day, and it was the proud boast of the manufacturer that no expense was being spared in order to produce the most luxurious and prestigious vehicle on New York's roads.

The vehicle had a certain novelty value at first; the wealthy clients who used it could not fail to be seen and it was no doubt an excellent ego massager! With such a limited range however it was a very expensive means of transport; batteries had to be changed or recharged regularly throughout the day making it a very labour-intensive product.

Various patterns were produced; in some of them the tonneau could be removed, making space for either two extra passengers or a luggage area.

Surviving examples are extremely rare and fetch very high prices on the few occasions when they come up for sale.