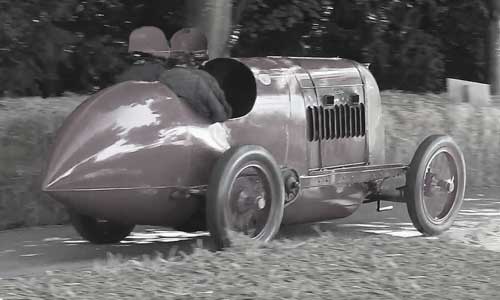 Fiat S76, which was fittingly christened ‘the Beast of Turin’ was built by Fiat in 1911 for the sole purpose of beating the formidable Blitzen-Benz. In those days, the only way of obtaining speed was constructing a humongous engine. Fiat S76 featured the kind of displacement engine that would be suited for a supertanker. This made the S76, which was also called Fiat 300 HP Record appear more of an engine than a car.

The S76’s engine is still not the biggest car engine. The title goes to 1936’s Packard-Bently which featured a 1,500-horsepower and a 42-litre V12 torpedo engine. Nonetheless, at over 7 litres, the S76’s cylinders are double the size of the Packard-Bentley’s.

Going by the standards then, the S76 boasted of cutting-edge hardware including multiple spark plugs, four valves in each cylinder, overhead cam technology, and an engine which pumped out 28.5-litres displacement thus providing almost 300 horsepower and about 2,000 lb-ft of torque. Only two Fiat S76 were made.

Even though you might not care about the history of cars, the S76 is hard to ignore. The 28.5-litre four-cylinder engine propelled the 1,650kg S76 to a top speed of about 140mph. It's theoretical top speed was 180 mph but no-one ever dared to take it there! This was absolutely stunning for that era. This was above and beyond Blitzen Benz’s 131.7mph which had been enabled by the car’s 21.5-litre four-cylinder engine.

The humongous engine whose bore was 190mm and the stroke 250mm necessitated that the car has a high cowl resulting in bizarre proportions. The driver had to literally look around the tall engine while driving. The Beast of Turin had no roof, it spits fire as it does not have an exhaust pipe, and featured an external chain drive. Other pertinent features included a four-speed chain-drive for manual transmission, water cooling, and solid axle suspension mechanism complete with rear and front leaf springs. Its roar was and is still unique.

Driven by Arthur Duray, an American driver, the car set out to set a new land speed record at Ostend, Belgium in 1913. He achieved a one-way speed of 132.27mph but was denied the record as it was unable to make the return trip within the predetermined timeframe. This was because Duray was not allowed to make the return trip at the same time as a tram that was running parallel to his racing track. The tram drive refused to adjust his schedule and give Duray a head start.

Although it was denied the record, this speed was twice faster than that of the fastest aeroplane. Without a roof and at such speeds, its drivers must have been pretty courageous especially with little to no safety equipment or features. According to Duncan Pittaway, “Arthur Duray was one of the most experienced racers in the world at the time. He reckoned that the first gear was okay, that third gear called upon all of his experience as a racing driver and that fourth gear needed the courage of a hundred men!”

The end of the era?

One of the vehicles made was sold off to a Russian Noble. The second one was dismantled by the manufacturer after World War I to prevent the competition from copying its specs. After some time, The Beast was forgotten as manufacturers came up with lighter and smaller multi-cam engines.

The resurrection of the Beast of Turin

In 2003, Duncan Pittaway, a Bristol-based car enthusiast began a quest to resurrect the S76 after hunting down and acquiring its chassis from Australia and shipping it to England. Pittaway admits that it was not entirely possible to trace the origin of the chassis used in the reconstruction beyond the 1920s, but he is positive it is the one from the original S76. “The chassis is certainly an original 1910/11 Fiat, the surviving pedals and steering box exactly match those within the Fiat drawings for the S76, as do the chassis dimensions.”

The chassis which was first identified in 1954 was actually thought to be that of the earlier Fiat S74. This was quickly disputed as the S76’s chassis, and axles had a different size and shape. Besides, its gearbox had a uniquely unusual design where sprocket shafts originating from the transaxle passed through two distinctive holes on the chassis’ side rails. This was proven when Pittaway acquired the engine from the second car.

He joined the chassis from the first car with the engine from the second car. However, it was still missing some crucial parts such as the body, the radiator, and the double-chain drive gearbox. Referring to photographs and its 20th-century blueprints, it has taken Pittaway and his crew close to 13 years to reconstruct the powerful vehicle.

The vehicle was supposed to feature in 2014’s Goodwood Festival of speed, but the hand-fabrication of its components dragged out the reconstruction process. It was brought to life in a thunderous roar, spitting flames and sparks, blowing out smoke, and looking more or less like an angry dragon in November 2014 after a being dead for more than a century. For those present, it must have been an impressive and terrifying experience as nothing could have prepared them for the car’s sheer violence. The vehicle’s bonnet is still intimidating, and it retains its red and gold paint job which gives it a somewhat regal appearance.

What is it like to drive the resurrected S76?

“It’s like wrestling a big, hairy gorilla,” says its driver Duncan Pittaway. The resurrected Beast of Turin made an appearance at Goodwood’s 75th Annual members Meeting and also took part in the 2018 London Classic Car Show where it was awarded the Best of Show title. It was displayed alongside Bugatti Veyron, Ferrari F40, McLaren F1, and Lamborghini, Miura among other cars. With no exhaust, we are treated to the ancient phenomenon of internal combustion shooting from the exhaust ports on the vehicle’s bonnet while the car shakes violently.

The process of its restoration was documented by Stefan Marjoram, a British photographer and filmmaker, who released the documentary in 2015.

How was it started?

At a time when it was normal for a car to be started by cranking it with handle, it was recognised that doing this with such a huge engine would be beyond the strength of any human being, and probably suicidal if it were possible anyway! The vehicles therefore started by compressed air, and to ensure efficient firing of the cylinders each one had three spark plugs.

Amongst family motorists, no. The S 76 was never intended to be a popular, mass market family car which was why only two were ever built. It was created purely and simply for prestigious reasons, and was used for racing and speed testing. The European Grand Prix was it's natural home where it had many successes in the hands of such famous racing drivers of the day as Antonio Fagnano and Felice Nazarro. All of these refused point-blank to drive it at it's maximum speed owing to the difficulty of handling the Beast of Turin.