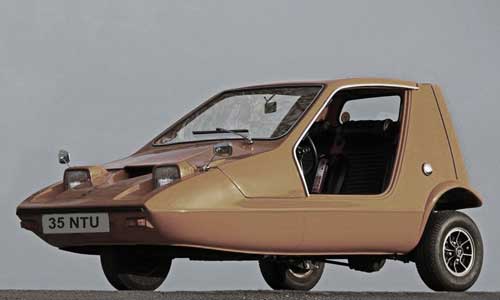 Should you really take a motorbike sized engine, and stick it into a two seater car with only three wheels, which is so small that the engine actually protrudes into the passenger area? Would you then not only paint it a horrible orange colour, but actually charge more for it than a Mini with four wheels and four seats, and the bigger engine? Well, Reliant did just that in the 1970s confident that it would sell to the 60s generation which was just starting to earn money and ready to get mobile. The actually made a total of 2270 of them; how many of those were actually sold has not been revealed.

It was designed to look racy, with a sharply raked front and black lettering om the bonnet that was supposed to give it the aura of a racing car. This was unfortunate because it meant that the engine had to be pushed back and it actually intruded into the cockpit area, not only increasing the cramped feel of the vehicle but it's internal decibels too. This racing image was taken to an extreme; there were no conventional doors but the fron bodywork hinged up to allow the driver, and anyone foolish enough to be a passenger, to clamber in, no doubt imagining that they were on the starting grid at Le Mans. The headlights were quite prominent, in keeping with the 'bug' theme, but so as not to spoil the raking bonnet design they were set low into deep grooves in the bonnet.

With a tiny build, small, hard seats and the roar from a stressed engine sticking out into the cockpit it was hardly designed to be a sedate limousine. Finish at first was spartan. However, perhaps in an effort to 'put lipstick on a pig' a more comfortable interior was provided with the ES model, which even had an ashtray! Luxury indeed.

The 700cc engine gave it a top speed of 78 but acceleration was woeful with a 0-60 time of just over 23 seconds. Very few people would ever take it up to it's top speed, though; three wheelers had a nasty reputation of either grounding or even flipping over when cornering at anything loosely described as 'speed'.

At the same time the Bug was on sale it was undercut by the Mini 830 which had a larger engine, four wheels instead of three, four seats instead of two, and excellent roadholding instead of an unstable rock n' roll. Four years after it's launch it bit the dust, not with a bang but a whimper.